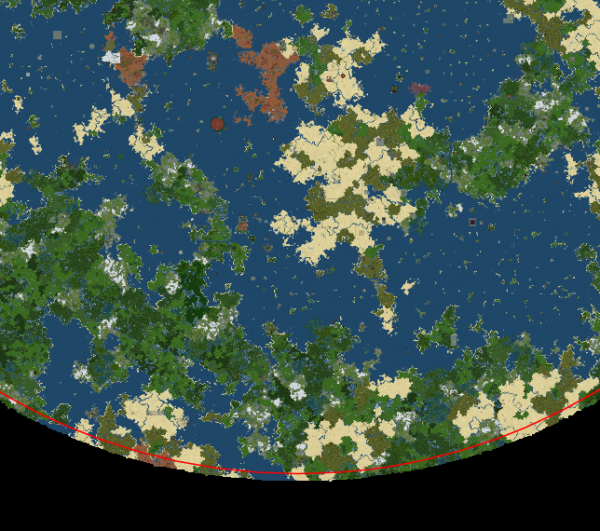 The South is a region that has a variety of crews from pirates to empires. The main ocean located within the South is predominately overrun with islands which all for the most part have their own bases and forts, this ocean has been commonly termed the 'Iborian Sea', it has also been referred to as the Juice Sea due to focused activity there, as well as the South Ocean.

There are numerous islands in the South Ocean, with many, if not all, islands having become inhabited and laid claim to, the main reason for this is due to the ocean's easy accessibility from The Cove and Warp South. There are numerous different crews which have a piece of the pie in this ocean, most notably the Juice Pirates crew, whom inhabit many islands (a couple negotiated into their care from Palmerageddon) and the Mesa Biome(s) (known as the Southern Mesa), they have become the main dominating crew of this ocean and influence it heavily, especially the upper/northern parts of this Ocean and about the upper middle.

Despite them being widespread here, it is also known as the 'Iborian Sea' due to the (now disbanded, though it's people still exist and live there) crew; the Iborian Empire, taking up many of the smaller islands, and inhabiting the a part of the Southern Mesa, particularly it's west flank, and laying claim to the red sand islands, known as Iron Sands and Port Acemunch, which were some of its most early (and important) assets, as well as including Lost Faythe and Barricade Island and a few more. New Faythe is the most notable asset in the upper sea of the Iborian people, which is their capital city under construction. Other places of interest in the upper parts of the South Ocean, is the canal known as Gordy's Gate, who its owner GordensAlive capitalised upon the opening, requesting those to pay the toll in diamonds, this toll has now however since been removed due to his inactivity, there also other small canals, though this is the most notable, largest and easiest to navigate. There is also Mesa Basa owned by Astrobolt, however the actual details of the base are unknown to the PirateCraft community.

In the mid part of this ocean, there is a small British Empire outpost known as Port Alexandria, which originally laid claim to many of the islands surrounding it, though this has gradually dwindled as they've become inhabited by other players, though, respectfully there are some islands that are still barren near it. It is owned by CrazyPirate, and though it is a small and rather inactive part of the British Empire, it is strategic due to its mid ocean position and its easy access to the sea, its small port, and if needed, could become a bustling place in a time of war in the South Ocean. Other notable places in this area would be the last parts of the Juice Pirates dominated area, and would be their fort Mango Bastion, which is designed to deter pirates and defend from any naval based offensive from the more southern reaches of this Ocean.

At the southernmost point of this ocean, many grand designs and settlements are lacking, however here there is the small peninsula nation known as Plant Nation, which is led by the player __plant, whom is one of the few crews to create their hub in this rather desolate area. The peninsula (known as the Plant Peninsula has had much history, originally being a Iborian colony set up by Palmerageddon to try see if he could encourage more activity in his crew if he was less Mesa focused, his idea worked and there was a time when the Iborian hub was very much centered on this area. However, due to technical problems and more pressing in real life matters, he was unable to tend this area for most of 2017, and could not contact __plant, whom during Summer 2017, set up their crew and quickly grew in activity, and quickly urbanised much of the northern tip of the land form. Despite obviously leading a small 'revolution' of sorts against the Iborians, but were no hostilities, as they no longer felt obliged to control the area, and happily relinquished control over to the new nation, and the two carry good relations still today.

The (separate) South West Ocean has bases, settlements, and forts from the British Empire, CoV, and the Elven Empire which is now the Royal Prussian Empire. Many other smaller crews populate the region as well. The most notable settlement is the old city of Evermoor, originally built by the Elves under Reptaria the Queen of the Elven Empire. But the city is now property of CoV. The only other major port in this region is Boomdocks which was owned by GordensAlive.