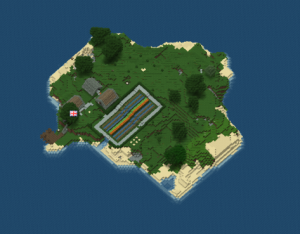 Port Alexandria on the live map

Port Alexandria is owned by CrazyPirate and is a part of the British Empire.

It is one of the few British settlements in the South Sea and South as a whole. It has existed before the Iborian Empire and Juice Pirates came to the server. The island consists of a small vacant decking for a ship to moor at, as well as a small farm and some houses for settlers.

It has been an interesting subject of international talk between the BE and IE before, mainly between CrazyPirate and Palmerageddon, due to the size of the island, including it's valuable position in the South Sea. Prices have been offered by CrazyPirate to the Iborians for the island, despite being considered, they have yet to have been taken, and it has stayed in the hands of the British Empire, it is however of some worth to the British due to it's position, and being one of the larger islands of a greater chain of islands, especially with the presence of the Juice Pirates taking over a many large islands, it is one of the few possessions of an elder empire in the South.