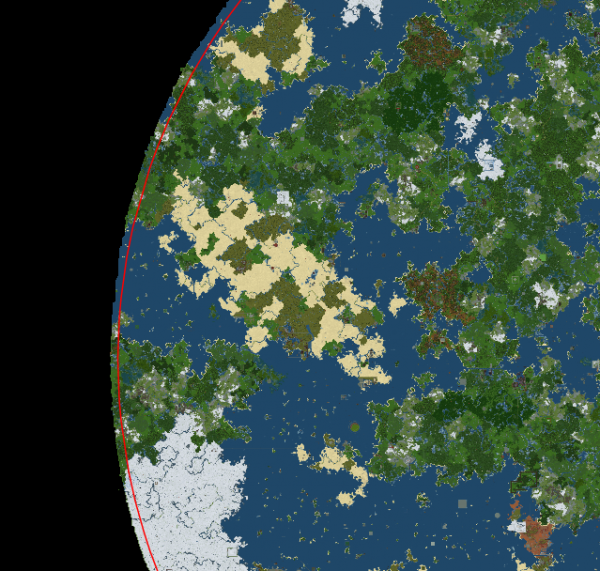 The West of PirateCraft is a populated region and since the current photo, The West has been expanded. The British Empire has some settlements within this region such as the province of Canada,Venice, and Vendigroth. The 13 Colonies have their main capital settlements with this region. The Lancastrian Empire have their capital homeland region with their capital city of Nova Halifax within the West. Players tend to be drawn to the large ice biome, but also the small Chittenden-Parrot Sea is densely packed with settlements like Whiskey Peak, Chittenden State, and Red Mountain. Aditionally, the crew of the Parrot Lovers also exists within this region. It is safe to say that this region of PirateCraft is more populated by Empires and crews that act more like nations than pirate crews. CosaNostra also has a significant base more southwest.

The West's geography is more continental than ocean, with many of the seas taking the form of basins, connected lakes, and short landmass crossings. There are also 2 major landlocked large lakes, with one more to the north, and one to the far west, both of which at their shortest point to the next major sea, being a swamp biome, which can be navigated by smaller ship, and can involve a lot less effort to turned into a canal, and link the bodies of water together. Due to the more continental nature of this region, there is an abundance of a different biomes. Most notably, people are instantly drawn to the large ice plains and the patch works of deserts, dotted with small oasis's of savannah and plains biomes. On the more eastern banks of this region, there are dense forests, including that of taiga, large mountainous coasts (as well as mountainous areas not far from the coast), and small stretches of plains.

However due to the rather undeveloped parts of it, its ferocious beauty, and on the whole, the large scale builds here, it is hard and deters smaller crews from setting up here, due to the intimidating and remoteness caused by the abundant hard terrain here.