New Faythe is the newly being built Capital of the Iborian Empire.

It's walls are most natural and it has been made cleverly by cutting corners. 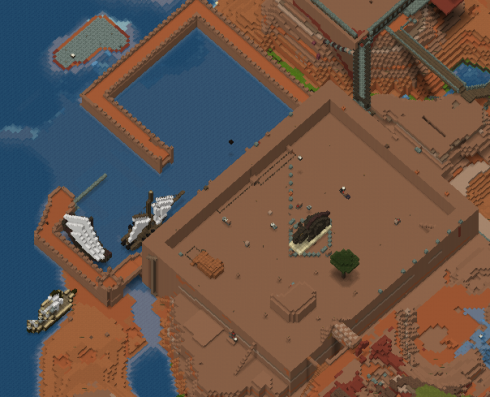 New Faythe, Capital of the Iborians

It's in a mesa biome so plateaus were there in natural formations, the plateau chosen had been dug into in the first place by cluster bomb explosions, it then had it's sides mined down about giving it natural walls which only needed to be dug and not to mention incredibly high as well, these will then be further tended to, making them more of a block colour, and be decorated/fortified at the top with a combination of stone brick.

It will be the focus of the Iborian efforts, and the center of all Iborian power and the people's capital, it would also be the first major development in the founding of the theoretical country of Iboria, which would be based in that concentrated part of that biome.

To possibly be a reactivated project for the Iborian part of the The Xanthian Order, this is due to the 'loss' of the (South Western) Iborian/Plant Peninsula, after its control was handed over peacefully to plantpotgirl and Plant Nation. The reactivation of it would be a hard endeavor, due to how hard it is to utilize the Mesa Biome, however, this is only a plan and there is no plan for the removal of the structure known as New Faythe as of yet, and it's possessions such as Iron Sands or Port Acemunch.

There is also a variety of possible attractions/landmarks in the city.

There would also be the port (there is one right now, but the finished one will be larger, with a decent layout), used for both civilian and military purposes, and would have public access.