Mango Bastion is a city built by the Juice Pirates on top of a large bastion in the south of the Juice Sea. 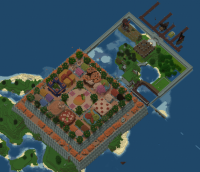 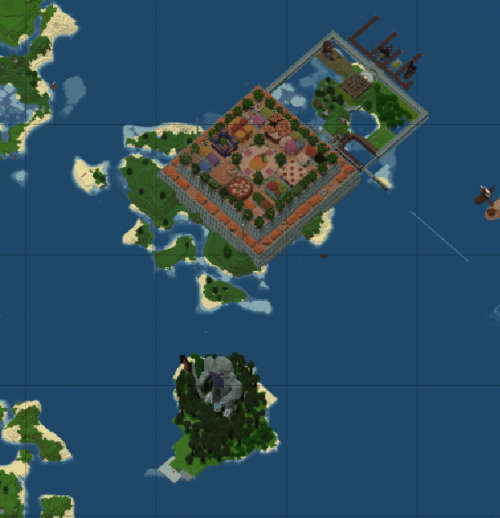 Mango Bastion and the Giant Dwarf.

The area was previously an empty island with a couple of abandoned huts. In the spreading period of the Juice Pirates, their main focus was to secure the sea and avoid foreign colonization, therefore every strategic or important land, such as the island of Mango, needed to be occupied as soon as possible. CeramicShip, Utente3Turbine and ggbrother were living in a microsettlement right next to it and they were asked by AppleJK to start a colonization. Due to several ship thefts and conflicts with two brigands, tree_blast and sticksrocks, a long wall in the middle of the sea was built to divide the Juice Sea from the southern one, where the enemies were living. After ggbrother managed to plunder their fortress and victory was achievedin may 2016, the colonization of Mango was finally started.

The first building was a pyramid-shaped tavern, around which some vegetable farms were positioned. When Halobearer98 started a war with against the crew, a large wall was designed around the settlement. In june 2016 a 140x140 bastion was built with stone bricks on top the whole island. The crew focus was then given to the Marulosseum in Marula Island and the work on Bastion Mango resumed only in november 2016. In december, the candy town on top of the bastion was finished and it was temporarily covered with snow in order to create their very own, personal Christmas event. Current plans involve filling the inside of the bastion with a submarine base.