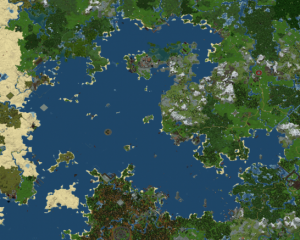 The Chittenden-Parrot Sea is home to many large settlements like the Parrot Lovers, Port Gletscher, and Whiskey Peak, as well as some small TNRR outposts and a man-made harbor connecting to the Province of Canada. Farther north juts out Red Mountain and the Chittenden State, which is where the sea got its name. The sea's most northern border houses Old Tempest Town and the British port town of Vendigroth.