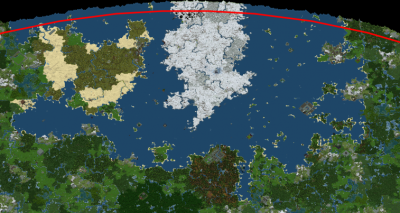 The Polaric Sea is one of the farthest north major bodies of water in the main PirateCraft world. It is located in the North West portion of the map.

It's name was first coined by TheAgentGamer, with some earlier references (a parody) of one of Palmerageddon's ideas of naming. Palmer's idea first was to name the region the "Polar Sea" due to it being near the top of the world and having a major ice mass in the centre, similar to that of the Polar ice caps which characterize the Arctic Circle. Agent then proposed the name "Polaric Sea" due to several reasons. One being that "Polar" is too generic and references the poles, when this sea isn't exactly on the northern pole but close to it. The second and arguably most major reason Agent decided to coin this name for it, was because "Polaric" means stark contrast. This is shown in the fact that on one side of the sea, you have one of the largest ice masses on the server, and on the other, you have massive desert and Savannah biomes.

The Polaric Sea is mostly ice/tundra and spruce biomes with some forest and mountains here and there, giving it a more frosty and cooler feel. It does however contain a fairly large desert and Savannah biome mass, if you are looking for a more warmer feel.

The Polaric Sea is the home to the Lancastrian Empire and the Endorien Empire, and contains several other nations having some outposts here and there like the British Empire, Byzantium, Parrot Lovers, and various other smaller crews.