Red Mountain is said to have been carved out of an active volcano, granting the smiths access to a forge, powered by the Earth itself, which they use to forge Ebony gear. Although the rich ebony mines grant the inhabitants great wealth, it is rumoured there is an unspoken amount of treasure beneath Red Mountain.

Red Mountain is located on Vvardenfell (-6080, -3400), surrounded by the Chittenden-Parrot Sea and bordering Vendigroth at its north-eastern border.

Little is known about the beginning of Vvardenfell, but it is assumed that the Phoenix-Pirates inhabited the island.

Eons ago, Red Mountain erupted and buried Vvardenfell in a deadly pyroclastic flow, making it uninhabitable for many years.

Recently the grand architect Pashjn embarked to the site of Vvardenfell, down in the far depths of Red Mountain, he found a hidden treasure of an ancient, ungodly power, as he tapped into this divine power he accidentally resurrected Elo106. Together they used this mysterious divine power to create grand halls and majestic towers, they fortified Red Mountain to protect the untold riches beneath the mountain and now supply Great_House_Hlaalu with Ebony Gear. 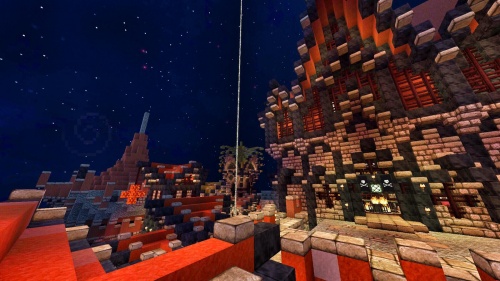