The Beginnings of Port Potato:

Original apart of a crew of 3 Deckhands, IronGolem5, Silver_Wild, and DeDerpyDerp_. DeDerpyDerp_ set out south of their original fort near East for a place to build a port. After receiving the rank of Firstmate, which he wanted to be able to sail a Frigate, he beached his small dhow at the current location of Port Potato. After constructing a small base, he set north and found a Frigate, to his surprise it was unclaimed. He captured it and sailed it to the Port and thus the Port Potato Navy was created, with the first ship being DNS Surprise. The first crew DeDerpyDerp_ was in was "DeDerpyDerp__'s Naval Empire", which didn't last long. Soon, Sonu06 of the crew AQUA asked DeDerpyDerp__ to join him, which he accepted. His 2 friends were kept in the dark of the port, in order to surprise them.

As DeDerpyDerp__ invested into the port, becoming more active, his friends became less active. Not much is recorded of this time, sadly.

The First Battle of Port Potato: This section is narrated by DeDerpyDerp__.

"Due to AQUA Aggression, an allied force raided Port Potato. I immediately surrendered after realizing his allies weren't coming to help, most of them being offline. Port Potato was allowed to surrender separately from AQUA, and we didn't even face occupation. Soon, negotiations about a war lead Sonu06, AQUA's leader, to explain that AQUA was a raiding crew. This was the first I had been told of our declared status of raiding. I began trying to secede from AQUA. "The battle was the largest defeat Port Potato ever suffered, having losing her only ship in war time, a... "unique" designed Warship for AQUA. (Apparently the bow was unclaimed.) It was however, not the longest siege."

After a peace was negotiated, DeDerpyDerp__ talked with his attacker, ironically whom he soon recognized one as the first person he built a ship for. (Person sadly unknown, burnt records) After apologizing for the attack, they helped DeDerpyDerp_ gain freedom.

By now IronGolem5 and Silver_Wild had moved in, and the port had a oak wood farm, and a Potato farm. This Potato farm caused the name to be "Port Potato". The Port of Potatoes.

Further information: While the lack of records is true, chronologically the next battle happened after both IronGolem5 and Silver_wild were inactive for a while, practically leaving DeDerpyDerp__ "The Last of Port Potato".

The Second Battle of Port Potato: This section is narrated by DeDerpyDerp_.

"Due to my loyalties to my allies, CSN tried to get me to fight ESE, one of my main allies. After refusing, CSN launched a massive siege. TL;DR 20 CSN crew members and at least 5 cannons were brought to bear. 5 hours of constant sieging, cannons destroying above what was my home, an armored citadel under the docks, near ruin. Port Potato, sadly had to finally surrender. "

Port Potato under the terms of surrender would be occupied by CSN and her trade was heavily restricted, with a major stoppage to ESE. Eventually, Port Potato was not forced to ever take arms against ESE, or her allies. DeDerpyDerp__ went inactive for a while, as neither of the two others (IronGolem5 and Silver_Wild) had any interest in being on the server anymore.

The Third Battle of Port Potato: This section is narrated by DeDerpyDerp_.

"I was the only active member of Port Potato, now under CSN rule. Due to me wanting to fully own the port, I had enough, raised my flag back ontop of the Port, and due to CSN probably forgetting about the Port, got away with claiming independence without any allied forces helping. This somehow worked. I would also like to point out how later both Caldera23 and Romich06 gave me back my port at a later date, as they couldn't remember owning it. " [No offense intented to CSN]

IronGolem5, being rarely active, did participate in the third battle, which helped burn the CSN flag garrisoned at Port Potato. [No offense intented to CSN] During this time, Silver_Wild had been offline almost 6 months now.

Port Potato was expanding at a large rate, it now having 5 ships to it's name:

The Crew of Port Potato, now under the DNE crew name, the crew "Port Potato", had expanded to include some former members of AQUA and 2 deckies. Sadly, most where inactive [Only DeDerpyDerp_ and Silver_Wild (rarely) have been on, IronGolem5 being on also rarely.

This section is narrated by DeDerpyDerp__. "Yes I know so far we established both IronGolem5 and Silver_Wild had quit, but they sometimes did come on with me out of boredom. Assume 98% of the time they where never online when I was."

"Sadly, after I became very close friends with Silver_Wild, being "Loved like a brother" (later on I realized that Silver_Wild hates her family). Silver_Wild suddenly broke ties with me, with little explanation. Most details are withheld for respect of her privacy."

Soon, None of the Port Potato members were active. Even DeDerpyDerp_, "The Last of Port Potato", IronGolem5 handing over his claims, and Silver_Wild (who would've been the successor to DeDerpyDerp_) leaving, left just him. (Now they really did quit, besides 2 times IronGolem5 checked in.) He went offline for almost 6 months, even unlocking his ships and telling allies "all yours, just sail them to a better home." (Luckily none we're ever taken).

Aka when we started keeping detailed records.

Yraglacus, a shipwright well know on the server (at least to Port Potato's allies) wished to create a crew, Prussia (PRSA). DeDerpyDerp_ joined Yrag in creating Prussia, and soon gifted his port as the First Prussian Colony, the then Prussian Port Potato. DeDerpyDerp_ soon became co-leader of Prussia. One of the main goals, as said by Yrag: "We need the biggest Port Potato on the server." As of 9/20/2021 we claim to have achieved our goal.

This section is narrated by DeDerpyDerp__. "Now we have started keeping more detailed records, so pardon a slight shift in format."

Port Potato temporarily left to Yraglacus on April 24th, as DeDerpyDerp_ left Prussia to join VISN to fight CSN. He will return to Prussia (PRSA) after the war. This was part of a planned Prussian "Land Lease" Program.

NOTE: Due to the Land Lease allowing DeDerpyDerp__ to stay long enough to be a dual crew member (A VISN program); and PRSA dying, DeDerpyDerp__ is still under land lease, having no crew to return to. "This may not be fully legally binding, but is a good enough excuse to stay in VISN." -DeDerpyDerp__

It happened. And then the:

Port Potato Rapid Expansion Project: (This would be when Southern Port Potato was founded:)

Port Potato launched a Rapid Expansion Project on August 8th , later renamed Expansion Era III, with a goal of a (5k claimblocks small city sized) expansion across the bay from Port Potato. Work so far has been putting signs everywhere making the intentions known, Port Potato will soon claim this land, as the crew is currently out of funds.

All major planned roads are done, and now we just will claim the plots and build when ready for the new buildings. *Also at 6pm EST A Mr. GodsEgg donated 500, the biggest donation to Port Potato so far.

A tour of the port gone wrong when Matlese_Egirl sieged the canal area, and when trying to flee to undo the siege, they got kicked from bad wifi. This was the first recorded siege where Port Potato not only was Victorious, but Outlasted her siegers. We did not seek any repercussions as it was "Force of habit." (and we won).

Due to a joke, our main farmer of the time Techno_elite had a $450 bounty on his head, and Percket and xXnekoqueen raided and sieged Port Potato, and DeDerpyDerp__ Stole Kraken Bait from RengokuCatz (formerly Morro_of_Mordor), to which he soon gave back. Percket soon claimed the bounty, and after the seemingly empty threats, have left Port Potato alone; to which we are thankful and have meant no offence. to yet.

We have also now recognized Techno_Elite, formerly Shadow_6400; as the newest bigger donator, having donated over 1.2k (excluding purchases) to Port Potato, from her 3rdExpansion Era, to upgrading farms.

- 3:21 PM (EST) Canal's Toll Mechanism Gets flooded, is now broken. Will be down until furthernotice.

Port Potato has also now offered to exchange donations for having street names named after you. Feel free to /mail or DM DeDerpyDerp__ for applications.

End of the Land Lease

Officially by now the Land Lease program, which got Port Potato (eventually) under VISN; would've ended. Now it is just the excuse of "having no Prussia to go back to" (DeDerpyDerp_) that keeps him and his Port in VISN.

Around now the Third Expansion Era has also lessened, as Port Potato has exceeded expansion goals and is starting to fund a new city.

At 7:23PM, EST The two Rail lines where connected, creating the line from the South Eastern (planned) Piers to the Northern Piers.

The Last Docks To finish not just Port Potato, but her docks, Port Potato plans to add docks to the Northern coast of Southern Port Potato.

Forgot to celebrate Port Potato's assumed First Birthday, as the only active member at the time went AFK for nearly a 3 weeks.

After a brief month of extremely less activity, Port Potato has been restructured again

First a brief note: - The fleet of Port Potato/ Port Potato Trading use the "DNS" prefix, however after Port Potato joined VISN, ships controlled/built use the VISN navy prefix, "VEN".

Incase anyone wants it, here's (not our) list of most ships on the server: Ship Index

During this expansion era Port Potato gained far more territory; creating a slight divide emphasized by the Potato Bay; leaving most farming in the North; housing and industry in the south. For more info look above for the history of the third expansion era.

Note: The reason smaller ships have less spots, is due to larger ships having priority; however many more smaller ships like dhows or even brigs can anchor in the harbor instead of at a pier.)

Info on the Canal

The canal is 27 wide at the water line, being 6 blocks deep. She is navigable to almost any ship, with no known length limitations, besides the turns to get through the canal. Please review the live map to judge if your ship will fit. Any questions, dm DeDerpyDerp_ or /mail him on the server.

NOTE: The bridge shown on the live map is open to anyone to control the lever on it's side, you can see it by inspecting the Northwest side of said bridge.

Yep these are the images. All images will go into this expandable list, to allow them to be hidden as the text formatting will be weird if the images are always shown. Please refer to images in text as "See fig. #", for example: 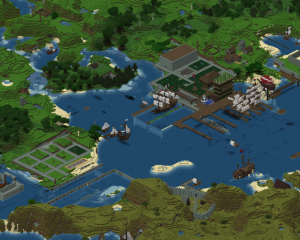 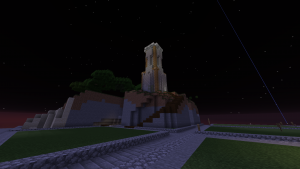 The Tower of Port Potato 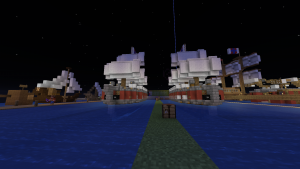 The First time the VEN Trafalgar and her half sister, the VEN Jutland would be seaworthy together. They both where commissioned this day. 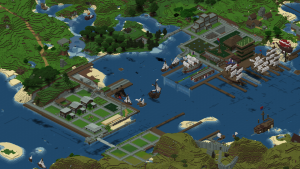 "Because I support people selling out to fund the port."