The ​DNS Southernly Gale was the Third ship built at Port Potato, the second being an unknown frigate, lost to time. She was an armed merchant ship, having originally 20 dubs of capacity; and 16 cannons to defend herself. She did many voyages to Visitopia and back. One such trip, she was converted into a full warship to block an escape route of a CSN 4th rate, fleeing Visitopia. A while later, she was ran back to Visitopia; and was stripped of her guns, facing decommission and scuttling, being to weak of a warship and Port Potato wanted to use the name "Southernly Gale" for a new warship class. However, with the commission of the new VISN carrier VEN Courage, she was then towed over to be a target ship.

As stated, the DNS Southernly Gale was the third ship built at Port Potato, 4th ship built by the late Potato Shipyards. She was one of few not-truly ugly ships, at least in DeDerpyDerp_'s eyes. (DeDerpyDerp_ being head of Potato Shipyards, owner of Port Potato... etc) She was designed to be a decent trade ship, with a small amount of cannons to defend herself. These cannons would never fire in battle.

She was commissioned on *Date Needed*, and had her madden voyage down to Visitopia; a route she would do many times, being the main and soon only ship to sail to and from Port Potato.

The DNS Southernly Gale was always welcome at Visitopia, having always brought Potatoes, both baked and fresh to plant, in exchange for item critical to Port Potato. She had made 4 such voyages, transporting $200+ of Potatoes from Port Potato to Visitopia. Her last supply run is still supplying Visitopia to this day, even after the war.

See Siege of Visitopia and VISN vs CSN for more info. April 23rd, 2021. Midday, DeDerpyDerp_ had left the Southernly Gale at the Eastern docks of Visitopia, waiting for supplies. She would run these to a joint city being built just south, a plan to help boost VISN, PRSA, GON relations. When word came a CSN warship had opened fire upon Visitopia, DeDerpyDerp_ quickly made plans to use his ship for the Defense. He had set out them moment PRSA allowed him to be land leased out to VISN to go fight CSN, as what better time then to get back at CSN capturing his port months before. Now under the VISN banner, the DNS Southernly Gale soon set out to round Cape Topia, to outflank the 4th Rate CSN capital ship. She refit at sea, having thrown all unneeded storage chests overboard, and got members ashore to bring her more materials for cannons, and even hotwired them up, allowing her to be the first Port Potato ship to have redstone linked cannons. Orders from PIPPIP5789, the leader of VISN, lead to her diverting from the suicidal duel between a ship with actual armor and good cannons, to setting up behind an old fort, to help prevent the CSN ship from fleeing. DeDerpyDerp_ soon used a raft to get a shore, and helped get allied forces in, including insurgent movements, and soon after a major fight broke, he helped box in the now abandoned CSN ship. (All CSN crew where raiding the city at the time). The DNS Southernly Gale eventually was moved back to harbor, long after the war ended.

The CSN ship has been mostly abandoned, just far enough from Visitopia to be no threat. Except, the Southernly Gale was close by, so she had to be quick to minimalize any possible fights, as she would lose. She was able to dock at Visitopia, where soon Port Potato's newer warships needed iron for their cannons, so she was stripped of her cannons to be used on the more modern ships. Sadly, she was left abandoned there, now being written off as a non-operation ship, being a bad choice for a trader, as Port Potato now had the VEN Port Potato; and she was impractical for a warship. She would soon be demoted to a target ship, to test the VISN's reformed navy's strength.

The VEN Courage was commisioned, and she needed a target to show DeDerpyDerp_ that carriers where practical. She was volunteered to be scuttled, to end her service to Port Potato. She has yet to be attacked, but will serve as a target ship when needed.

The DNS Southernly Gale was the most used tradeship in Port Potato's history so far, and the only warship to see combat outside with of Port Potato, let alone almost with another ship. She also was the first to have auto-linked cannons, and so far has outlived DeDerpyDerp_'s main crew of PRSA. (By the time she was "mothballed" at Visitopia, PRSA had collapsed.) 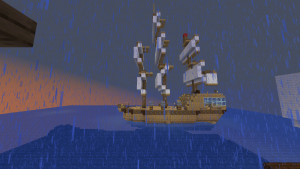