The Phoenix-Pirates were an infamous and notable pirate crew on a lost server, who moved to piratemc. As the name says they were pirates and attacked anyone who was unfortunate enough to cross their paths. 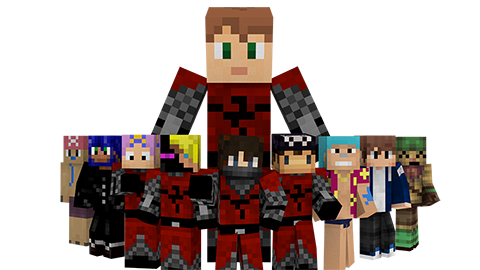 Captain and Founder of the Phoenix-Pirates.

First Mate and Redstone Wizard, with a hang of drinking to much.

Quartermaster Naio the great champion was the greatest swordsman of the Phoenix-Pirates.

Armin the giant sleeps most of the time, when awake he likes to mine. Considering his size it takes a lot of time to mine, once done he goes back to sleep. Armin holds the record of being asleep for 3 years, having slept through the siege and destruction of the Phoenix-Pirates.

The Pirates settled on Vvardenfell without much bloodshed going unnoticed for a few days, they built a castle and a small settlement.

Syd Montague and 6 bottles of rum disappear after the crew party too hard. As they find out that Lewboi100 had killed him, the Phoenix-Pirates declared war on the 0utlaws. By right of conquest they demand 6 bottles of rum for Syds funeral. As hostilities go on they raise their demand to 52 diamonds. Pirates Elo106 and Syd II Montague sneak in to the 0utlaw base taking advantage of MandarinPanda expanding in to an unclaimed area. MandarinPanda signs a month lasting truce, his equipment is kept to pay for Syds funeral.

The Elven Ball slaughter and the siege

Elo106 gains access to the Elven Ball from a friend and slaughtered guests. Reptaria Queen of the Elves is one of the casualties. Enraged The Allied declare war. The Phoenix-Pirates Castle is under siege, numbering nearly 20 attackers, Elo106 finds himself alone defending.

Through unknown means the attackers make it past the iron doors and gain access to the hall, where they are greeted by cannon fire. The Allies sent wave after wave and Elo106 was forced to retreat into his vault. It was here where he prepared for one gallant last stand. The allies raid his vault and Elo106 barely escapes.

Downfall of the Phoenix Pirates

After the loss of their vault, morale was at an all-time low. It was then when a traitor emerged and stole the last treasure of the Phoenix-Pirates. Elo106 dies shortly after due to his injuries from the siege. The Phoenix-Pirates disband.