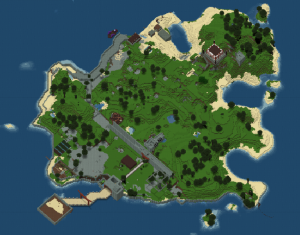 The island previously known as "Havanna"

Havanna is an island located at the coordinates 3100/-6400 once ruled by BensterPC and PipsterPC. The isle was the site of a once flourishing pirate town where ruthless cutthroats could relax after long voyages.

In spring 2015, a series attacks on British colonies in the east were launched from Havanna. In retaliation for the attacks, the British Empire launched a bloody invasion which resulted in chests being plundered and ships being set alight. The siege ended when KingKarim joined the fray and single-handedly fought off the British forces.

Pirates Pip and Ben utilised the opportunity to amass a fleet of dozens of fledgling pirates and set sail for the British territories. This force didn't go nearly as far as planned, and led the way for yet another assault. A few days later the British amassed a new force and constructed an offensive complex around the town known as Fort Havanna. It was only used a few times as an outpost however, as Pip and Ben suffered heavy defeats in other regions of the world and were forced to capitulate.

Havanna was regenerated after Ben was banned in summer 2015. Lorddarkus0 attempted a resettlement of the isle as the Oriental Empire of China in late 2015, but it was abandoned.

Written by Rivvur and her side of the story. Made as unbiased as possible.

Havanna was renamed by Rivvur to Havana, so it will be referred to by Havana in this section.

Around the middle of 2017, Rivvur's base Warlock's Rift (check her wiki page for the base) had established a significant hold on the sea nearby. Two of Rivvur's new bases were close to the blown up island Havana, so she asked Smokeyriver one day, and Smokey unclaimed it for her and regenned it because the owners were inactive.

Gifting Havana to The Asylum

Around a month later, Rivvur still hadn't done anything with the beautiful island, except claim it. Since Rivvur was still in The Asylum at the time, she offered it up as a crew home since they didn't have one yet. Cysteen took Rivvur up on the offer and claimed the island for TAS. Cysteen wanted to wait till most of the significant TAS members were on to start building, but that was difficult to schedule because most members were in different time zones. Due to this, nothing was done to the island for a couple of months because Cysteen wouldn't let anyone work on the unnamed island at that time.

After a long while, Rivvur finally convinced Cysteen to start working on Havana (not named that at the time). So, any TAS member that was on got tasked the job of filling in caves at the time (it helps siege-proof if you fill up caves). After all the caves were filled, the TAS members online started to lay out the format of the buildings/sections on the island with wool. Ex: Yellow wool is the paths, Red is the fort, etc. After we were done with that, Cysteen un-trusted everyone from the island and called it a day. A week later after asking Cysteen to work on it again, she wouldn't let anyone again because she wanted it to be a group project, but all the TAS members couldn't log on at the same time.

Formation of The Coalition and it's Impact on Havana

Skip forward 2 months (closer to modern day), with The Coalition being formed due to differing opinions. Cysteen still had Havana claimed at this point, because tensions between crews had been rising (leading to the Forsaken War) and Rivvur was hesitant to ask. After the Horsia Wars, Rivvur's friends in CLTN finally convinced to confront Cysteen and ask her to give the island back, since nothing had been done with it for over half a year. Cysteen kept trying to find a solution, because she still wanted to keep the island that Rivvur graciously gifted TAS, not her. Finally, after a month of going back and fourth and Rivvur asking for it back, Cysteen suggested asking GodsDead to paste the island in another ocean, so there would be two. Rivvur did not fully like that solution to the problem, and would rather just have paid Cysteen, but she was done at that point and just wanted Havana, her island back. While Rivvur was offline, Cysteen got the island duplicated in to "TAS Ocean" after a lot of asking GodsDead, and nothing has still been done with that version. Cysteen gave the original back to the rightful owner, and Rivvur started working immediately on an underground base. The contents of this base are classified, and nothing is still on top of the original.

Location of the Original Havanna and the Duplicate