Valgard was founded when the Dunmeri people flocked to the city of light and magic Mournhold setteling close by, the small settlement soon outgrew Mounrhold in both population and beauty thus becoming the new capital city of Morrowind.

As more and more pilgrims made their way to witness the power of the Tribunal more living space was needed, thus Valgard was founded, soon it became the new capital of Morrowind and all Dunmeri people. 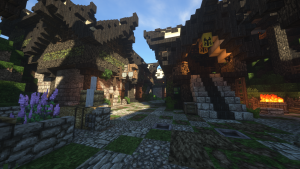