Marula Island is a city built by the Juice Pirates, home of the Marulosseum. 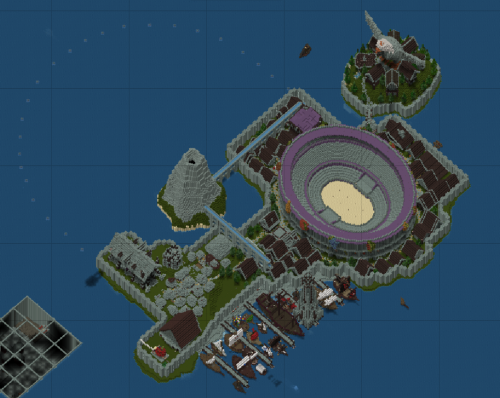 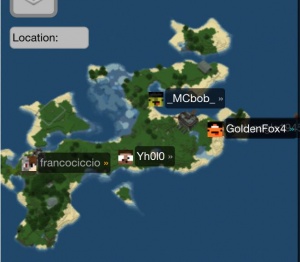 Marula was not an early settlement of the Juice Pirates. The northern area of their ocean was empty and it was decided to occupy a big island as influence point to avoid foreign settlements on the nearby coasts.
The island was plain, with few trees. francociccio and MasterM1214 built the "Stubby Tower", the first building of Marula, on a hill, the 21 may 2016.
. Even though Marula was a young settlement for the Juice Pirates, it became a popular choice for newcomers and quickly got the highest population. A small village spread around the Stubby Tower. A wall and some food farms were designed shortly after. 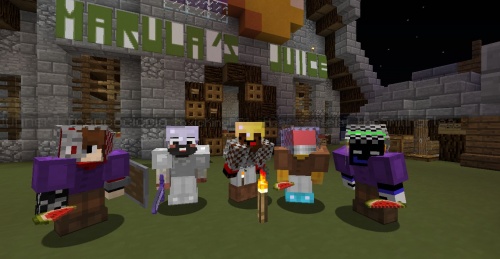 The first great town project was the "Marula's Juice", a big tavern that would host all crew parties and victory celebrations, such as the end of HaloBearer98, the fall of the Templars or the return of M4RT3S. The Marulanians were already improving their alcohol production skills and were unrivaled experts in the field. The Marula's Juice was built in few days and completed the 17 june 2016. It had two floors for drinking tables and a stage, while the basement contained the heart of the alcohol production, the famous Cellars of Marula. 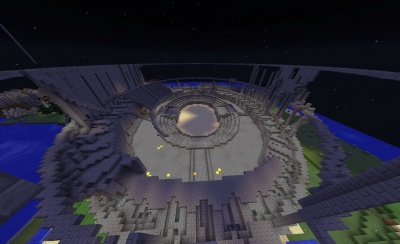 Building process of the Marulosseum.

"Think big" is one of the mottos of the Juice Pirates. Marula had until that day colonized only the western side of the island. It was decided to build something to push the crew to a new level and show what the Juice Pirates were capable of. MasterM1214 planned an arena and drew its perimeter on the island. Despite some individuals being worried of the efforts needed, the glorious and gargantuan size of it was acclaimed by the crew and the construction was started. That was the first and most superb experience of combined effort of the whole crew. The best builders from all towns came to help and who was not skilled provided rivers of clay and stone bricks. The Marulosseum, as it was called, was 40 blocks high and had an auto-opening floor to switch from a ground arena to a water one. Hanging fruits were built on top of the walls, symbols of the Juice Pirates.

Once the Marulosseum was completed, the crew focus was moved to other projects and the Marulanians worked on new house districts, as the old village had too small buildings. The port and the lighthouse were built during that time. Meanwhile it was decided it was time to build an iron farm, considering the high level of activity of the town. Of course a clean iron farm was not matching the aestethics of Marula and francociccio proposed the concept of a Volcano from which some aqueducts would spread trhough the city. In january 2017, a big yellow galleon was built by the good companion of the Juice Pirates, xMadMonkeyx. The ship was then attacked and damaged on its way to Watermelon Dock by JamminMas and NadomaticGamer. Additional motivation to fight raiders.

In december 2016, TheSmilingFlea found a zombie spawner in the depths of the coast of Marula. It was therefore started a villager base project and a specific building was created in january, the "Insula", whose basement reaches the bedrock. The place was filled with vegetable farms for emerald trades and a minecart rail links the spawner with the Insula.

Several paranormal activities were recorded at Marula. It is believed that a tormented spirit used to live on the island before its colonization. During the building of the first houses, many particle sightings were reported by the inhabitants. Flying axes could chase the Marulanians all of the sudden. When MasterM1214, in the umpteenth encounter, got spooked and logged out, he joined minutes later and found himself in a cobblestone box. Sentences on the ground, such as "die this is my island" become a habit.
On another occasion francociccio found a mysterious doggo near the village and killed him. The doggo though, reappeared several times and proved to be undead. The sightings stopped in august 2016.

A jokily rivalry formed between the inhabitants of Watermelon Dock and Marula Island about who is building the best city. While the Watermelonians are pastry experts and cook tons of cakes and cookies, the Marulanians are masters of alcohol. Another dualism can be found between the Skyscrapers and the Marulosseum. It is not surprising to hear bombing threats between the two groups, but they always end up laughing and joking.