Watermelon Dock is a skyscraper city built by the Juice Pirates. 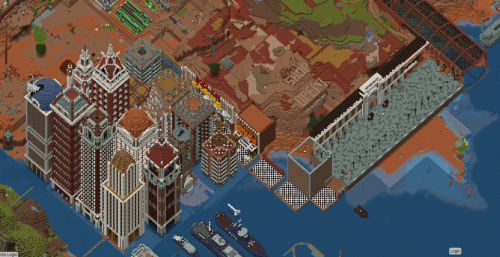 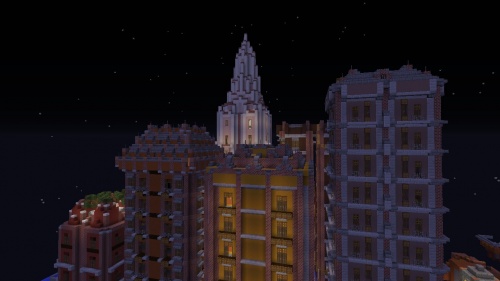 In order to get trading access to the northern seas, AppleJK sent his crewmates danieldan4, lordeagle1945 and CreeperAssassin1 to a Mesa biome in the north-western side of the South Sea/Juice Sea. They managed to build a structure upon some natural clay columns from which they could dominate the landscape. The nearby area offered a plain valley, mountains on two sides and some rivers. Their mission was to dig a canal between their sea and the northern one. The work was slowed down by the attacks of Target_Down, a raider who lived in a hole nearby. Initially member of the British Empire, he became a brigand after being kicked and started plundering every open chest he could find in the Juice buildings and setting on fire unclaimed wooden structures. The Juice Pirates were lucky as mas23 opened a shop where he was selling items at incredibly cheap prices, blowing up the world economy. This made him an odious prey for a large number of people. In the end of may 2016, mas23's hole in the Mesa was sieged by over ten people from around the world. The siege lasted several hours as new people were constantly joining the attack. Many people fell in mountain holes and could not get out because of the siege.

In june 2016, MarcoHero joined the settlement and the inhabitants came down from the mountains to build a small town on the river with a long wall surrounding it. The wall was poorly claimed and far from being useful. The main materials were acacia and hardened clay. Life was simple and a nice community grew through the streets of Watermelon Dock. One day M4RT3S, a juice pirate who used to visit frequently the place, suggested to transform the place into a "Venice" with canals instead of roads. For safety purposes, a clay castle was built for the population in case of sieges. Meanwhile, a group of "babies" joined the crew and settled with the Watermelonians. They had such nickname because of their naked, derp skins. In the background, the Juice Pirates were refusing every form of alliance or compromise with other crews, which made the crew the main target of GSG9, Asylum and Templars. During one of their assaults, the attackers found out the babies were all hackers.

In one fell swoop 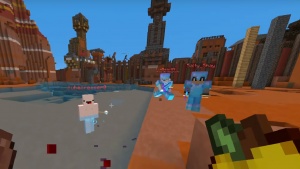 A long battle which lasted hours began between the attackers, the inhabitants and the babies in a chaos trio. Here is a video where the hacking magic of fire_brothers79, cubecreeper0, Gabribandi7, Falc_eagl3, GeneralDoom10. Apart from the accusation purpose, it is a good reconstruction of what Watermelon Dock looked like at the time. https://www.youtube.com/watch?v=VutpwJKP8sg&feature=youtu.be

Witness description: "The battle began with a blood bath in the outside. Hackers and non hackers kept dying. While the real, clean Watermelonians (MarcoHero, Z_Lor20, Dynasty_Uboa, dark09Ste, CreeperNoob67) stayed outside naked kicking back the outsiders as much as they could, the babies retreated in their house. After a storm of arrows from the attackers, a siege was started and cannons were used to fire at the babies. Browe_ blows up during the fire but eventually the siege is won and the hacking magicians begin to fight back. After losing their armours, they use every sort of tool, such as hoes and shovels to beat the aggressors. Meanwhile _PigGuardian_ was trying to stop the attackers from killing the non-hacking inhabitants."
In one fell swoop, the crew reputation was destroyed and the Juice Pirates fell in complete isolation. 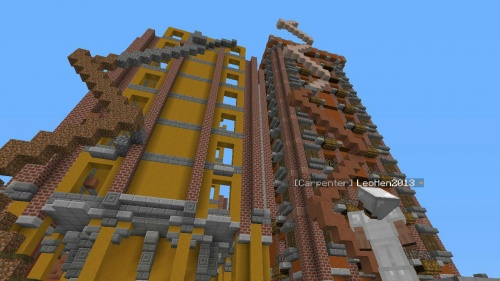 In july 2016, a new project was started. After debates and preparation, the Venice idea was merged with a skyscraper one. CreeperAssassin1 drew the buildings while others gathered materials. The skyscrapers would be divided vertically in four living columns each with floors and not horizontally. While in other juice towns buildings were organic and limited to the most skilled architects, the Watermelon skyscrapers were designed so every inhabitant could help the costruction because all floors were identical and easily copyable from CreeperAssassin1's screenshots.
The construction kept on inexorable til today. The last floor of each skyscraper hosts specific areas, for example bars, skating rings, verandas, pastry shops.

A jokily rivalry formed between the inhabitants of Watermelon Dock and Marula Island about who is building the best city. While the Watermelonians are pastry experts and cook tons of cakes and cookies, the Marulanians are masters of alcohol. Another dualism can be found between the Skyscrapers and the Marulosseum. It is not surprising to hear bombing threats between the two groups, but they always end up laughing and joking.