Stonemeadow is an abandoned settlement, currently occupied by the United States Empire.

Stonemeadow was founded in June 2015 by GO_BLUE (then known as CelticTiger38, DoubleSocks_ (then known as Donttreadonme), _grandon_, and SBurger6969. It was founded due to the pirates fleeing their old settlement, Ireland, because of ELven raids. The settlement was originally independent but joined the Elven Empire after coming to peace with their former enemies. 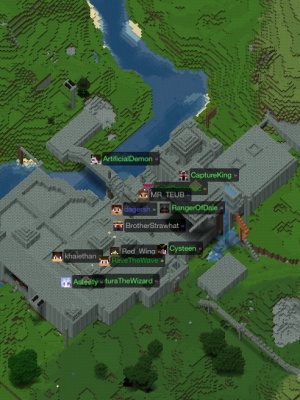 One of the many raids on Stonemeadow, as seen from the livemap.

In September 2015, Galaxy219, Red_Wing (then known as ravensrock1234), CaptainKnuckles, BlackMambaVenom, Xboy123, and NavyPilot8 joined the settlement, which was still unnamed at the time. After a month of them living there, raids started to occur. Many pirates from crews such as CoV and Delta came and mostly went after Galaxy219. Eventually Galaxy got sick of the raids and the lack of help from the Elven Empire and formed his own crew, the United States Empire. After this happened, many Elves started raiding Galaxy and Stonemeadow split, with everyone except GO_BLUE joining the USE.

After some thought, CelticHawk joined the USE. However, this did not last long as he got fed up with the constant raids on the USE capital, Decky Town. At the same time, more players from the USE such as Astrobolt and lites59 moved to Stonemeadow, along with British Empire member Nitrogengaming77. GO_BLUE would go on to rejoin the Elven Empire, but it would disband in January 2016, at which Blue and SBurger6969 joined Engima.

Eventually Engima disbanded and after a short stint in Team Rocket and The Gotham Knights, GO_BLUE joined the reformed Elven Empire. USE also began to fall apart due to inactivity of its leaders and losing members to TGK. Galaxy219, Red_Wing, DoubleSocks_, and SBurger6969 would go on to join the Elves along with Blue and, despite a major raid by CoV and conflicts with TGK on land use, Stonemeadow became a large and prosperous settlement within the Elven Empire once again.

At some point in 2016, the settlement left the EE and reverted back to American control. During this USE reign, more residents became inactive and the settlement fell into disarray. A mass unclaiming of land took place, with the protected walkway, several bases, and GO_BLUE's harbor being unclaimed. The claimblocks that had formerly been used in Stonemeadow were now being used to build the USE bases of Sailorton and Domcanta. By the end of 2016, Stonemeadow had no permanent residents.

As of October 2018, Stonemeadow is occupied by the United States Empire but is abandoned. It may be revived someday.