Originally built in 2016 by Buckmaster1993, Chasedillon123 and Hemp_Bone. The city was walled around and many buildings built during this time 2016-2017 and increased its population to around 12 players living within the walls.

It was abandoned in late 2017/ early 2018 by Buckmaster1993 who moved the capital and name of Rome to the world boarder of the newly extended map. Rome was rebuilt on the worlds border in a hodgepodge manner with no set style and all kinds of builds ranging from The Empire State building to the Great Pyramid of Giza.

In mid 2019 with the help of head admin of the time Xeron, Buckmaster1993 reclaimed the original location of Rome and started cleaning up the old city which still stood relatively intact.

Then finely in May 2021 _Augustus_Caesar began rebuilding Rome in its original location, this time using Maps/ Photos and Recreations to build the city as close to IRL History as possible.

The Temple of Venus and Roma

The Basilica of Maxentius / Basilica Nova 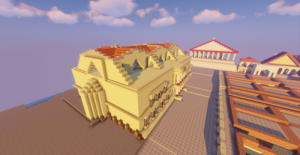 Temple of the Devine Claudius

Future Structures: The Temple of Jupiter