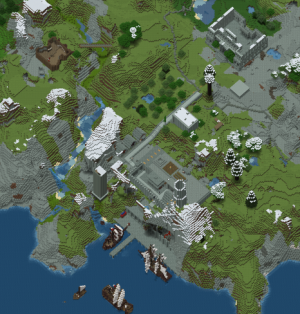 Port Victoria From The Livemap

Port Victoria is a colony of the British Empire. It was originally built by The Dominion Of Canada as Ottawa. It is home to stores, a pub, a government building, houses, and a bustling port. It is located very close to Port Vernesse and a short boat ride from Gloomsbay. Planned features include: a Police station, a hotel, a shipyard, another fortress, more houses, an expansion of the streets, and a building for visiting government officials.

Port Victoria will be home to high-end retail stores. They will carry goods of the highest quality and will have an affordble price!

To open a shop you must file a request at city hall.

Port Victoria is currently under construction and phase one is expected to be finished within the next few months. The current plan for the town consists of 3 phases, the first phase is infrastructure (roads, port, defence, and government buildings), the second phase is residential (houses and apartments), and the third phase is miscellaneous (parks, decoration, more stores, redstone compatibility, and improvements to make life easier). Those are the first 3 phases, there will be more phases added in the next few months/years (depending on construction speed and demand for expansion). For more info please contact the governor, SpikyCactus01. Long Live The British Empire