Gildor first joined piratecraft in the summer of 2015. Starting in the crew TEE (The Endorian Empire) with Elita, Jmoney (now Jmoo) and Willzo (Who later famously raided the vault of Secondeath) Gildor established two colonies near the crew's home base, the first (1 on image) containing within the first building Gildor ever buit on the server (circled in red) which served as his home for a time. This colony had a population of around 4 at its height and contained a courthouse, shop and docks. The second colony was named Whiteridge, and built by Gildor (with help from other crewmembers) as he discovered his love for construction. A more ambitious colony, whiteridge contained a governers mansion, crew training arena, various shops (most notably the estate agents) and a siege bunker. Later, the colony became the centre of a controversy as two players argued over ownership [1] 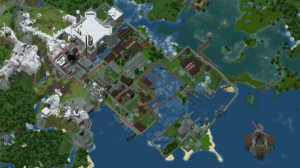 After TEE broke down due to members and leaders leaving, Gildor joined the crew Delta. A pvp based crew, Delta was led by the notoriously rich Secondeath and often concerned itself with battling its various rivals. Gildor, having no talent or interest in pvp, mainly engaged in construction projects - most notably the Delta Naval base (Helped by icebear89) and Delta Tower, and soon rose to leadership within the crew. This crew at one point broke down and was revived as Enigma, until Secondeath was raided [2] and the crew broke down. 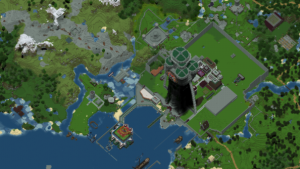 After having been in 3 crews which where not long lasting, Gildor decided to join the most stable crew he knew of - The British Empire. After being in the BE for a month or two, Gildor gained the position of Home secretary in Bislo's government and concerned himself with the construction of London, the capital of the BE. This project repsresented the culmination of Gildor's experience constructing large builds and is still being worked on today. By the end of Gildor's term as home secretary, London went from a few houses and Buckingham palace to a functional city acting as a center of server trade. By the time of the next BE election (6 months after the previous) Gildor ran for the position of Vice Prime Minister, with Bislo who went for re-election as Prime Minister, and won. Again, Gildor spent much of his time working on London however for the next 6 months assisted in the running of the empire's government until the end of this term.

After spending over a year in the British Empire, Gildor decided to run for the position of Prime Minister with Taulov. The election had Gildor's duo running against Turkeyman11a and Mountainrasta who later left the BE. Gildor's policies related to strengthening the Empire by increasing the education available to new recruits and organizing events for BE members. Gildor is currently (at time of writing) in the middle of his term and has started a program to offer defense workshops to all members and is organizing the ongoing construction of an event arena. 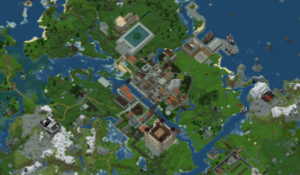