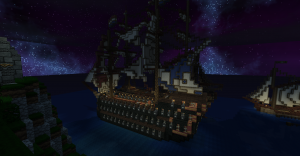 BHS Mongolia with its new livery

The BHS Mongolia is an Indiaman ship currently docked at Ceylon. Originally, the ship was a wreck after competing in the 15th ship battle. Massive repairs and modifications were applied to the vessel, including a new gundeck and a new firing system.

The day after the 16th ship battle, Spectre_Orleans was granted permission by Maximus_Terragon to modify and repair the wreck of HMS Destroyer from the 15th ship battle. The same ship was duplicated between the dates of both events. Over the next few days, repairs were made to the hull and sails whilst a new gundeck was added, along with a new firing mechanism. The firepower was also upgraded from 54 cannons to 116 cannons. When repairs were finished, a port of registry was organised by the British Empire which turned out to be at Ceylon, rather than London as originally suggested. At Ceylon, tests were conducted to assess the firepower of the vessel after its hull livery was changed to black only. To claim full ownership of the Mongolia, a fee of $1600 was paid to Maximus. To this day, the Mongolia remains at Ceylon until the day before the 17th ship battle when a gathering of BE members is due to be organised.