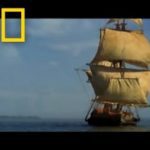 The society was formed on October 7th 2018, with its founders being Palmerageddon and TheAgentGamer, whose original goal was to produce a universal, organised map of PirateCraft Oceans and Seas, with them named respectively to make navigation and conversation easier when talking about places on the map.

Shortly after the first voyages of HMS Adventure under the British East India Company, conversations began between Palmerageddon and Guineapigplays about a possible 'semi-merge', to develop the PCGS Fleet, which would help to undertake The Grand Survey of PirateCraft's geography, history, territories and artefacts.

The PCGS Fleet would be a peaceful, unified, cross-crew organisation for the purpose of helping to document the world, and to champion freedom of navigation whilst respecting territorial rights. As a result of this, plans have been put into motion for the recruitment/construction of ships, crew members and PCGS colonies from which fleet ships can launch from, with the insignia GSS (Grand Survey Ship).

Its aim is to create discussion about the PirateCraft World an produce geographical, political and historical articles on the world, hoping to produce an Issue every 3 or 4 months. It also aims to map and organise the geography of the PirateCraft World. Link to forum: https://piratemc.com/groups/piratecraft-geographic-soceity/

Organised into Articles, which are products of projects, which are designed to produce discussion and produce feedback which can be taken into account, and Issues, which are more to be read, and comprise more of smaller projects (e.g. progress on canals/builds) and academia (e.g. historical events), while not intended to provoke feedback, it is intended to promote discussions about its contents.