The New Roman Republic was a crew founded by Buckmaster1993 and PolluxCaesar sometime in 2016. It was a powerful nation in its time, gaining many enemies and allies. Sadly, it has long since disappeared.

History taken from the Roman Archives 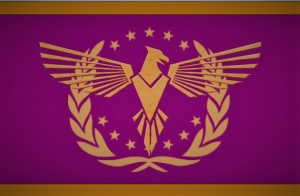 Flag of the New Roman Republic

The New Roman Republic started with one man, Buckmaster1993, he was part of the Dwarven nation of Eternia, a nation that primarily builds underground, and one day decided to explore the surface.

The Dwarven president, InventorJohn (Above average height for a dwarf), decided to let him go, seeing him as no threat to the Dwarves, Buckmaster1993 visited the server archives, and discovered a book telling of an ancient civilization of technologically advanced people named the Romans. However, through the archives he could not find any information on where this civilization once was, so he ventured to the east, away from the major empires, to an area scarcely populated by any.

There, he found a ruined civilization, arrows, not shown to be Dwarven, Elvish, or Brittish littered the ancient walls, so thick you could climb up them. Inside, he found a city full of stone buildings and a single castle, he explored the castle, and found many documents of current technology, but written in ancient glyphs, Buck learned segments of the native language of the Romans, Latin, and built upon the ancient city, eventually, he started recruiting, and a wide-eyed lover of Roman culture came, Chasedillon123.

After a while, Chased became rather distainful towards the empirical form of government that they were using, reminicent of late Roman culture, and staged a protest against it, through this Chasedillon123 earned his spot as consulate in the New Roman Republic.

Later, Chasedillon123 found a cavern beneath the city, littered with zombies, skelletons, and spiders, and at the end of the cave he found blueprints for buildings, weapons, and ships previously unseen. These included:

He also discovered new Roman building methods, some of these methods did not resemble any Roman structures known to history, and they soon realized these were plans for revolutionary buildings that never got into production, some of these buildings took inspiration from other citys such as Machu Pichu, Mesopotamia, and Greece.

Eventually, the NRR solidified itself as one of the major powers in the East, and the Dwarven president, InventorJohn, realized he was very wrong assuming Buck could not make a crew to rival him.

Eventually, Eternia, Verussia, and the NRR created what is known today as the Federation Nations Alliance, or the FNA, at first, it was a think tank of nation leaders protecting one another, but eventually InventorJohn went AWOL and Chasedillon123 and Buckmaster suggested they turn the FNA into a force for peace, instead of a think tank, this is the current state of the FNA.

Land disputes insued, and the NRR is still expanding, and is currently building a city based on Mesopotamian building and Machu Pichu’s layered city style, known currently as Elexandria, in honor of a CoV warlord known as Elexander.