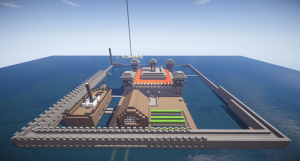 The Isle of Luteus is a town owned by Icanra, and currently one of the three capital cities of The Xanthian Order.

The Isle of Luteus is located east of Cove, about 2/3rds of the way out until the edge of the world, bordering the East Ocean.

Not much is known as to the previous history of the Isle of Luteus. All that is known is that the original walls, and houses were constructed during the early days of the Verussian Empire. It received a significant amount of damage during a siege and was abandoned.

It was reclaimed by ChaseDillion for a while, whereby a statue of a Phoenix was constructed. It was then bought by Icanra in that state for around £200. Icanra spent around 3 months repairing the ruined town, and restoring it to its former glory. In order to protect it from further attacks, the walls and towers were reinforced with stronger stone and a layer of wood logs.

A port, beacon, market, and lighthouse were added in the later stage of the reconstruction. During this time, he met the dwarf dinosaur12ml. He moved onto the Isle of Luteus, and created his own vault on it.