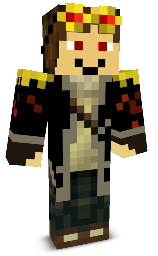 GingfulGlider was a long term member of the community, who was well-known for controversial comments and actions, which ended up getting himself permanently banned from the server. He was also an avid pvper and had a very mixed reputation. Some players hated him while others considered him to be a very nice person

GingfulGlider was a well known pvper. While he was not considered the best pvper, he had a very good KDR and was considered a good pvper. His prowess in pvp earned him respect from other pvpers and as a result he was able to befriend other prominent pvpers such as DriftingSixGuns. Due to his pvp skill as well as his may other skills, he was often the backbone of whatever crew he happened to be in. His pvp skill also allowed him to both defend whatever crew he was with at the time from raids as well as to lead their raids.

GingfulGlider was a well known raider. He would often raid people and often even managed to steal a significant quantity of resources and valuables. When raiding he was often the leader of the raid as he was usually the most experienced raider and pvper present. Despite his raiding earning him many enemies, it also earned him a robbinhood like reputation among his crewmates and allies as he would often give them large shares of his loot. He was also known to give large shares of his loot from raids to deckhands and cadets and also often taught them to raid.GingfulGlider was also an avid ship stealer and along with turseturtle would steal and re furbish ships which would then be given away or sold.

GingfulGlider built many buildings. Some of the more notable ones included his base which is regarded as one of the best, largest, and most advanced constructions on the server. He also designed the old palace in Verace which was never completed. GingfulGlider spent a significant amount of time and resources constructing roads in and around Verace. He also designed and built a large canal. GingfulGlider had a large role in the designing of Fort Turtle (which has since been mostly destroyed) which when built was considered one of the most defensible cities on the server. Finally, GingfulGlider was considered a great shipbuilder. He built many large and impressive ships such as the HMS Queen Mary II.

GingfulGlider joined TNRR at some point. He eventually was promoted to the rank of capal. After a high capal position was left vacant,he was elected high capal of TNRR. Later,during the wars of independence (The Anti-TNRR Coalition) he sided with TNRR. He participated in multiple raids on TPE's Fort Turtle where despite scoring many kills, he was not able to gain much for TNRR. At the First Battle of Aire the HMS Queen Mary II (CosmicKingJoel's ship) which was crewed by CosmicKingJoel and GingfulGlider was significantly damaged by a small hastily set up coastal battery manned by turseturtle. The ship was saved from being sunk by GingfulGlider's quick thinking when he lept overboard and successfully forced the crew of the battery to retreat. GingfulGlider also played a crucial role in the defence of Aire at the Second Battle of Aire. At the end of the war during the peace conference, GingfulGlider managed to negotiate down the reparations which TNRR would be forced to pay to the victors. For example, TPE originally demanded 3k while TRT demanded 2k. GingfulGlider managed to negotiate both down to 1k. His skillful negotiation managed to delay the complete collapse of TNRR significantly.

He is still loved by many current and former PMC players. This is clearly shown by the amount of players who vouched for him in his 2 unban appeals. In both appeals, many players vouched for him to the point where staff had to close the threads. There were many pages of people vouching for him. While he was a controversial player, he had an overall very positive impact on both the server as well as many players on the server. His legacy, unfortunately, has not been as well remembered, especially because the majority of the players he had the chance to have a positive impact on have either been banned or have quit.