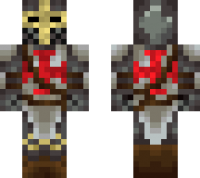 Uarehere is the current leader of The New Crusaders, as well as the creator of the God's Blade Cult.

The first night of Piratecraft; A Brief Biography:

It all began when I woke to the sound of waves, on a wrecked ship that I have never seen before. I was extremely confused, not knowing were I was or how I got here. But, as I explored the wreckage, I heard a voice in the south wind. Not knowing what it was, I decided to explore in that direction. Using planks from the wreckage, I made a small boat and began my journey. Many hours passed when finally I heard the voice again, this time southwest of my location. It was not too far away, as I could hear it quite clearly. It was a light murmur, asking for help. As I was new, I decided to follow the voice. A couple hours later a came to a long, sandy shore. Next to the water was a small shack. As I walked toward it, I knew something was wrong. The murmuring had stopped, and I could no longer hear the wind nor the sound of the birds. Not even the waves made a noise. As I entered the shack, I witnessed a horrible site. A bloated, rotting body lay on the floor. As I looked on in dread, I heard the murmur again, outside of the shack. I followed it, and after a short walk, I came to a cave. I noticed it was surrounded by a crystalline substance. I walked inside. And walked. I walked for days, then weeks, then years, until I finally came to the end of the tunnel. Resting on the ground was a small gold cross. I picked it up, and immediately saw all the land I had came to. I saw all who lived, all who died, and all who had not yet came to its beautiful shores. I knew they wanted me dead. ALL of them wanted it, and they would do anything to get it. I looked behind me to find myself back at the entrance of the cave. I exited, looking around to make sure nobody was watching me. This cross is now my most prized possession. As the sunlight outside hit me, I fell to the ground. Now I remember. I was sent here on a mission. I will complete it. Ḭ̪̩̔͋̃̚͢ ̩̦͉̍͊̌M̟̗͊͑͛͜Ṳ̰̿̂S͖̳̠̀̎̚Ṫ̤ ̢̡̻̦͔̉͗́̓̉C̰̈́̐͢͠ͅỎ͍M̤̑P͔̯̅̍Ĺ̬̯͙͂̽ETE͎̖̤͂̄̍ ͉̤̤͙̊̾́̾IȚ̭̾͝!̻̽