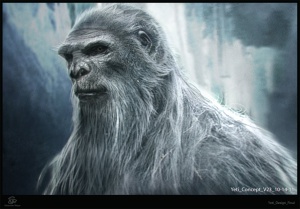 Bearded yetis are a noble species bound by an ancient code of integrity, honor, respect, dignity, and justice. Known to humans only as myth these days, they are a colorful bunch of characters with wonderful beards every shade and tint you can imagine, and some you can’t, with personalities just as diverse. A mature bearded yeti may live for thousands of years gathering great wisdom from their vast experiences as well as an intimate knowledge of the inner workings of the earth and heavens above.

Their lifestyle is one of general autonomy. Not because their antisocial since they really love to gather for the feasts, singing, eating, and dancing with family and friends but mostly due to the fact that there aren’t many bearded yetis around anymore. Humans being a sometimes insecure species tend to kill what they don’t understand or doesn’t fit with their worldview. So, like many other magnificent creatures throughout history the bearded yetis have been hunted and forced into hiding.

In general a peace loving, hard working and joyful lot yet when they or the family and friends are threatened the bearded yeti will unleash their inner beast. Not with the intent to kill, unless absolutely necessary, but to restore peace. Because of their value of justice they have been known to plot against those who have attacked or betrayed them or their friends and family. They are very patient as well waiting and biding their time until justice is served. So do not mistake their kindness for weakness as that would be a costly mistake.

Our story begins with a salty old codger by the name of MrClusterFluxin. Now old Clusterfluxin in his younger days, to put it mildly, was as wild and nasty as pitbull on lsd, mayhem, metal, and motorcycles were the only life he knew. Even though he lived as an outlaw he lived by the code of honor (which was very much like that of the bearded yetis) his pops taught him as a child. That code helped him survive that old life of his with a small part of his soul intact giving him a second chance to become the man his father knew he would.

The day came when Fluxin would take trip into the Himalayan Mountains, mostly to clear his conscience and make peace with all he had done. As he climbed the mountainous terrain he ran out of food and became quite hungry. He felt as if he would not survive the night when he came across a strange rather large sheep sleeping curled up under a rock. It was dark; he was starving; so he killed the sheep, skinned it, and ate it. While he sat by the fire eating, he looked over at the sheep skin and could have sworn it had a small red beard. Figuring the red hue came from the blood splattering while slaughtering the animal and being delirious from exhaustion he fell asleep never giving it a second thought. The next morning he found a nearby cave that overlooked the small village of Gatlang high atop a ridge in the Tamang region right at the border of Nepal and Tibet and settled in.

A week or maybe two had gone by when from deep down in the bowels of that cave began a rumble so guttural so sickening that even the bats were afraid to move. It seemed as if time had stood still as a deafening silence fell. Then a shriek that sounded like a hundred thousand babies getting their booster shots all at once split the air as shadows flickered across the cave walls from the small fire that was lit to keep warm. ClusterFluxin sat paralyzed as the giant white beast emerged. Eyes black as coal pierced the very soul of ClusterFluxin. He had a huge bluish tinted beard that glowed as if on fire and long white fur that was matted into dreadlocks that covered the seven foot tall four hundred pound monster.

ClusterFluxin knew this was his penitence, his payment in full for his crimes against humanity. This creature was the manifestation of his hubris all the evil he had done in the name of selfish gain. He managed to shake off the initial shock and the fear melted allowing him to get his bearings. If he was going to survive this he had to fight. Reaching into the fire he grabbed a stick, the end smoldering and red. The beast lunged as Fluxin strafed right stabbing the Yeti in the eye burning it out of its socket. Growling and howling in pain the giant spun around smashing ole ClusterFluxin in the chest with five inch razor sharp claws flaying him open and crushing his ribs. He could feel the hot stench of its breath on his face as he came to and opened his eyes.

Defeated, he stared numbly into its cold black gaze waiting for the beast to devour him, accepting, even feeling somewhat relived as he faced his death.

Then a wave of sorrow and true repentance crashed upon him like a sledgehammer. In the depths of his soul he began to see all those people he had harmed over his lifetime even feeling their pain both emotionally and physically. He was shown the aftermath of his actions of how those men and women lived out their lives after he had destroyed them. He saw how his actions had changed them, broken them, changing their lives forever.

He wept and repented.

Simultaneously he saw his abusers and traumas he had endured just as if everything was happening right then. Like when the family friend that used to babysit told him not to tell anyone about their special times together when he was not much older than a toddler, the bullies that relentlessly tormented him in elementary school or the divorce that ripped his family apart. On and on the parade of memories went by.

Now this once feared and hard man forced to face his own brokenness wept and forgave.

As the process continued he had a new sensation begin to overwhelm him. There was lightness as if a mountain was being lifted from his chest. He could take a full breath for the first time in years. It didn’t matter that that it would only last a few more moments.

The Yeti poised to strike the fatal blow reaches out embracing MrClusterFluxin behind his head with his massive hand pulling ClusterFluxin in close then speaks “You killed my only son on the side of this mountain and devoured his flesh. I found his pelt and carcass when I returned from the country side.” He was barely able to get the words past his quivering lips. His eyes welled up with a mixture of anger and deep loss. “I went to the high court to plead for justice. Flesh for flesh, soul for soul. You humans have taken everything from me. My wife was killed for her head.” Unable to contain his emotions any longer he shouted and growled “JUST FOR THE SPORT OF IT.” ClusterFluxin involuntarily relived himself at the ferocious sound. “But I was reminded that we are eternal as matter cannot be destroyed but merely changes form. So I chose to move on to the realm beyond this one and join my family there.” His demeanor began to soften “Instead of justice I chose mercy and grace. Murder and vengeance is not our way. But, as with any action there are consciences. For me to go to the realm beyond death and be with my family a sacrifice needs to be made. That sacrifice is your old identity.” Not quite understanding what the yeti meant Clusterfluxin didn’t care. To have a second chance to right the wrongs he did was worth whatever it took. The yeti spoke one last time “The King has pardoned you as I requested. Now as the old you died here today a new life will begin. I must go and you will now take my place. You have found the peace you so desperately longed for as have I.” A flash of red then white and gold began to strobe around them. In an instant ClusterFluxin was looking at the shell of his body lying on the floor of the cave.

As the unsettling grogginess of what just occurred wore off and his head began to clear, the realization that he was now indeed, by some miracle, merged with that yeti. MrClusterFluxin was dead. He was forgiven. He was reborn as the MrBluBeardedYeti.

Still bearing the scars from their fight most notably the missing left eye he began to take inventory. He was still himself or at least his consciousness and memories were still intact but something was different. It was like the yeti had left a piece of himself behind. Actually it felt like more than just a piece but he couldn’t quite put it into words. There was a duality yet an oneness. “Well” thinking to himself “Plenty of time to ponder these mysteries later. I need to get out of here and start fresh. Make right my wrongs and maybe, even help others that are searching for peace find it.” He walked to the precipice of the caves mouth and surveyed the landscape whilst stroking his majestically glowing blue beard. Embracing his new identity as MrBluBeardedYeti and with a renewed sense of purpose he stepped into the unknown.

At the time of this writing MrBluBeardedYeti was only a few hours of playtime from the rank of Gunner. He has made a home on an island that is shared with a few other players and looks forward to building a nifty little haven in the near future for anyone needing a break from traveling the seas. He is a member of small but growing crew of honorable folks the KOC.