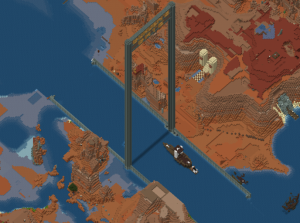 Gordy's gate on the live map

Gordy's Gate is a large gate which the inactive player Gorden constructed in the South region of the server in the North-East of the 'Iborian Sea'. It was one of the first monopolization's of a canal, and required those who want to pass through to the South West Ocean to pay a fee of 1 diamond to have the gate lifted. This toll has since been removed, leaving the Gate and the passage free.

However, due to it's hindrance when the toll was in place, and most sailors not equipped 24/7 with a diamond, there have been numerous other smaller canals popped up around it, these are however are often smaller in width and depth, and are harder to navigate and further from The Cove, so with the removal of the toll, it has led to crossing over into the South West Ocean definitely a lot easier.