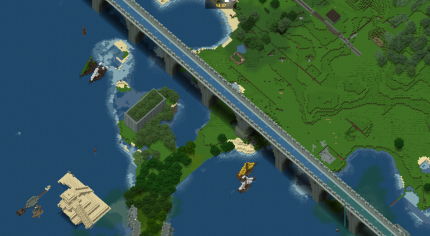 The Aqueduct is a large structure on the Pirate Craft map which connects Spawn to The Cove, built by GodsDead and co. During its construction, they took on the role of the Evil Land Contractor and effectively steam rolled anything in the way of it.

It did contain a movecraft ship to try speed up the journey, however it seems to have disappeared, so most players either use the vanilla boats to traverse it or their smarts and use /warp cove.

It is however in every player's best interest and bucket list to travel the length of Aqueduct at least once.

It also one of the an official "Wonders of the PirateCraft World".