The New Empire (also called TNE) is a medium sized almost only builder crew with the goal to build the most beautifull and detailed town at the whole server. Originally founded by ScriptX and called TBCG, but later dissolved and rebuild under the new name The New Empire by ScriptX and IndexOutOfMJ (Lord__MJ)| colspan="2" style="text-align:center; border:1px #DCDCDC; background-color:#DCDCDC; font-size:12pt" | The New Empire|-| colspan="2" style="text-align:center"| 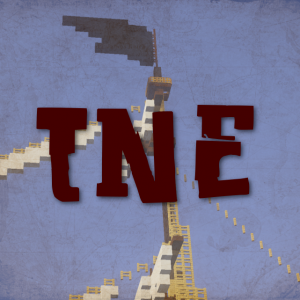 ScriptX has joined the server at the 19. Feb 2017. He has sailed with a normal wooden boat to the next island to with his friend Two_Com to test what the ship-plugin (movecraft) can do. While building her first boat, they have made the fault that they have modified the boat while it was controlled, what cause the ship to sink. After building a new Boat and sailing alone into the wilderness ScriptX found an enemy island where he decides to mine some diamonds (stupid idea). Sadly the island owner had not the same opinion as Scriptx and killed him with a GBow oneshot. So, after dying, respawning and sailing once again with his normal wooden boat, he decided to build a third movecraft boat, and meet his friend Two_Com who is still remaining at the Island where the first boat sunk, and is building his own boat. After sailing for a long time they have meet her at the middle of the ocean. They decided to find a new place to live with this newly build boat, but sadly Two_Com has to go offline and Scriptx decides to cruise with a normal wooden boat to his, at the livemap determined Point to build, because the sailing with the movecraft plugin takes much longer. So after sailing for round about 10.000 Blocks over the ocean, ScriptX has found his new place to live and started building there. At the next day, (20. Feb) the prodecessor crew of TNE, the TBCG (TheBlackCreeperGames) Crew was founded. At this Point his friend Two_Com has sailed also the 10.000 Blocks to the new Base, but sadly he doesnt set his home and died several minutes later trough a exploding creeper. at this point he was depressed and dont wanna sail the distance again and he quit the battle for this day. Luckly one day later he decides to take the distance to itself and saile once again to the newly foundet City.

Later in the days Two_Com lost attention at the Piratecraft Server and ScriptX was the only person who is building his city of his dreams.

Because he is only building alone, he quickly lost attention on this server, and has only come online for a short duration to prevent an unclaim. Luckly he can convince IndexOutOfMJ to join this server, but he also shared the same fate and is blown up by a creeper with no sethome set. After a day, he decides to sail the distance again to be part of the New Empire. At this point, the crew TBCG was dissolved at the 17. Dec 2017 and the Crew TNE was born.

The national flag of TNE

The main part of The New Empire is Building. So PvP is only present in form of traps all over the town and if it is necesaary to defend thier most precius Items. Anybody can visit the town and explore it without the risk retting killed. If ScriptX and IndexOutOfMJ having the time, they are doing also sightseeing tours through their Town. The living in the town is taxfree and it is not necessary to spend items or make special jobs to live in there. The big building projekts are financed by gifts from allys, or special items that are buyd from usershops, with the money they get from the captain donations. The political movement of this crew is conservatism, even if they have no interests in PvP. Tha national flag is a mix out of the Building tools, that they use, a crown, that is standing for the empire they lead, and the aqua blue crew colors.

The airship from the front

The TNE crew is known for their complex redstone builds, and huge detailed constructions, such as the airship, the townhall or the newly build residence.

The airship was a mega projekt that was build within 2 Weeks from 2-4 People. It is a 160 Block long flying build, that was designed and build during the april build of the month 2019 and has won the first price at this BOTM. The main builders where ScriptX and IndexOutOfMJ. The helpers where Two_Com, the wood farmer, and Niki, the stone farmer. Also has Romich02 gifted a doublechest full of netherfences, that where needed for the zeppelin that holds the ship. The main problem during the build was the insufficient resources of wool and netherfences. So these resources where been buyd at the usershops, but that was only a temporary solution that has lasted 3 days. After this time no more wool and netherbricks are stocked at the whole shop region. During the build, the builders have died several times, because the server lagged due to the mass of players online, and some of the placed blocks have disapeared, what causes that the builders are fallen into the depth. Only ScriptX had the ability to try teleport to a home during the fall because of his captain rank.

The New Empire took part two times at a BOTM. The first building that was submitted was the townhall at the middle of the marketplace and it become the second place. The second time they took part at the BOTM, the new build airship was submittet, and from beginning of the competetion it was almost clear that they could become the first place with it, what they than also did. During the competetion came the reproach on, that they have used an template for building it, which turned out to be wrong. After 2 BOTM's the decided to change their transparency behavior about the BOTM to an absolut untransparent system, so nobody knows if they are submitting a next building or not. They have also decided that it is only allowed to submit a building within the crew if there is a very good chance to win this competition.