Difference between revisions of "Nova Halifax"

Nova Halifax is one of the largest cities within the Northwest Region of the PirateCraft World. It is the current capital city of the Lancastrian Empire and the Province of Nova Cascadia. 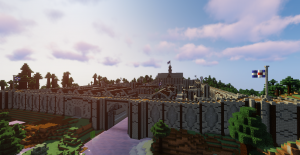 The city of Nova Halifax was founded in the early summer of 2017 by TheAgentGamer as the new capital for the then 2 year old Lancastrian Empire. The city was established just upstream of the delta along River Halifax. It began with small hut and house settlements along the west banks and cliff sides of the river. Some of the first inhabitants where TheAgentGamer, ChibiDoge, KaTcsu, SaiTheGuy1011, RainbowInferno, and DrAndrew. Each person built their own house anywhere on the west side of the river which left the small town at that time looking pretty chaotic. There were some utility buildings built, that being a small animal ranch on the south side of the houses and a zombie spawner found for xp mining just along the west banks of the river on the north side of the houses. With the influx of people wanting to live in the area and the already chaotic design, TheAgentGamer would begin construction on a much more orderly and planned out section of residential town, on the east side of River Halifax.

This section, would still be to this day the residential section of the town. A church was designed and built right at the curve of the River Halifax on the east side, however the church was decided to be too small and a new, larger cathedral, was built. Over time the town began to expand to become a city and a new industrial and economic center was built on the west side of the river where the original houses where. All the houses where torn down except for the Sai Residency, which was the larger of the houses on the top of the hills that was just moved northward to be out of the way of the walls. The Sai Residency still sits on the hills to this day, just in a new, more northern location from the city. 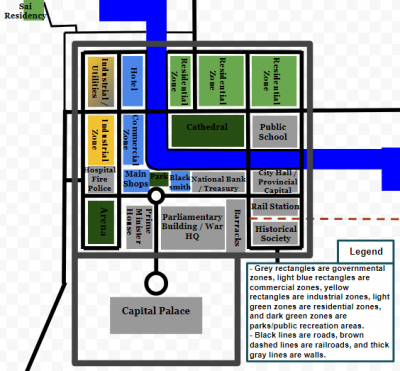 Being the capital city of both an empire and one of the main provinces within said empire means that a lot governmental buildings needed to be placed in Nova Halifax along with residential, commercial, industrial, and various services and transportation networks needed for any major city. Thus the city has gone through alot of planning and changes to various locations to make everything fit.

To the right is a map of the layout of the city. Although not pretty, it shows the general idea of the outline for Nova Halifax.

The city of Nova Halifax contains

And outside the walls of Nova Halifax you can find various other buildings as well, like the historical house of the Sai Residency. 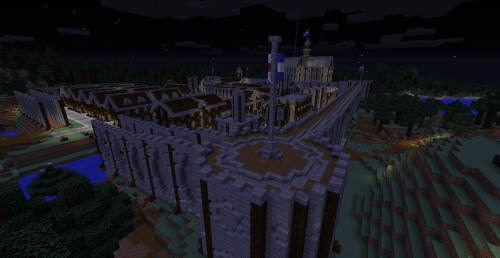 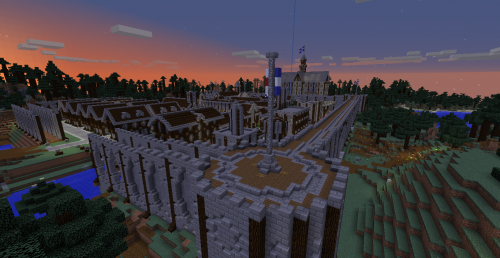