The Mithlond-Mediateam ended the support of this page! There are no longer regulary updates on the content below. In fact the tab "News" may not be on the latest state of information.

Mithlond is one of the largest cities on PirateCraft. The town has a population of 11 inhabitants, only 3 of these are active. Founded in May 2018 by Minemoppel, LittleEndermann and Creeperman101, they have created one of the largest communities on the server.

The currency used in the city is the "Mithlondsche Taler", but it isn't in use that often. Mithlond also has a harbour, a bank, a nether portal, a XP-farm, a brewery and agricultural facilities. There was a subway, but currently it is in a derelict state as well as the TV1-Studios.

Allied crews of the city

Mithlond got a own Discord-Server for inhabitants and guests, feel free to join when you want to talk with us! NOTICE: This discord server is only for people who want to communicate! It's not a public server, please don't abuse it.

This link was posted in arrangement with Maximus_Terragon. If there should occure any problems with this server, please contact Minemoppel immedeately. 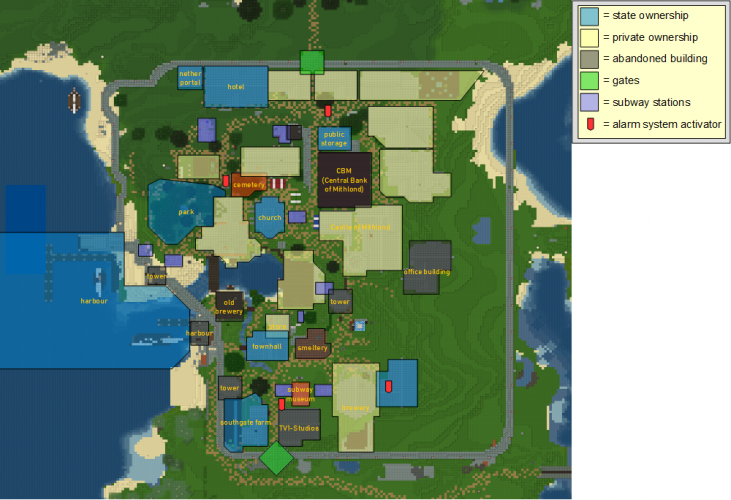 The city has grown very fast in the last year. After the first three buildings have been built there was a short break until Mithlond got new inhabitants. Therefore there was a huge demand of new residential buildings and other facilities like farms and a storage. In the nower days there are many construction areas but the building boom stagnated. Many older buildings were neglected and so many of them are increasingly expiring.

The XP farm of Mithlond is in general a usual XP farm which is based on a cave spider spawnwer. This farm is located in the North-east at 1330 10 -170 and can be reached by a ladder, which starts in an old subway station and ends in front of an iron door, which protects the XP farming players against enemies.

After some renovations in the past, the farm is now bright and attractively designed and affords enough comfort to spend more than one day without any problems. Moreover the farm is equipped with a field and a small fishing pond.

The Subway of Mithlond was a prestigious project at its time. The public subway was founded in June 2018 and ended services in February 2019. There was a total amount of 6 stations and 2 subway lines (U1, U2) but only the U1 was ever operated, the U2 never was finished. It was based on an old subway system that was used to transport items and persons in case of a long siege. 100m of tunnel costed around 250 Taler, that was way to expensive. Also sometimes the time you were waiting on the station took longer than the whole traveled way would have taken by foot. Additionally the technic was very susceptible to interference. Mainly because of these reasons the project was aborted while the U2 has been built.

Today there is a small museum in the old control station. Also there is one remaining station you can visit. 4 other stations were simply abandoned and one will be rebuilded to a better entrance to the XP-farm.

Feel free to edit this page and add usueful informations, this can help us improve this webside. But for sure we have some rules:

Be aware that this page is regulary controlled! Meaningless information and irritating content will be deleted!

→ Eventhough the support on this page was ended we ask you to adhere to the rules above. Thanks :)